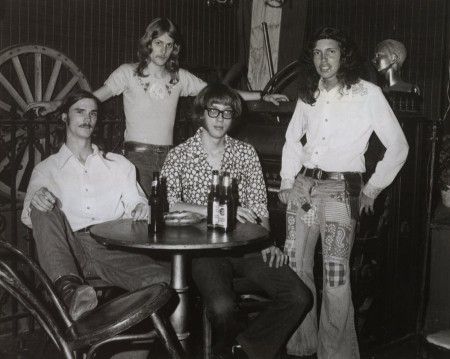 It was just before Christmas. A fresh, clean snow blanketed the world outside my window, a fire crackled in the wood stove and the warm glow from the oil lamp colored the room with varied orange hues. The scent from a large, simmering pot of freshly-made butternut squash and parmesan soup wafted throughout the room, mingling with the faint suggestion of woodsmoke.

I was alone in my head, draped on my comfy, old recliner balancing a warm bowl of popcorn and my old cat in my lap. (It wasn't lost on me how times had changed: it used to be that I balanced a cold drink and a warm woman in my lap, but...nothing stays the same!)  Behind my eyelids, in full technicolor, was playing a re-run of an old memory of rock 'n roll days gone by...featuring me!

It was a time long ago, before acoustic guitars had pickups in them and you had to tape cheap-o Radio Shack mics inside, plug into the ol' Fender

Bandmaster and hope that the feedback didn't rip the top off the guitar (or your head!). A time of padded, gold-flecked naugahyde Kustom PA columns loaded not-always-so-carefully into the back of a '65 Chevy van with a big plate of bacon 'n eggs painted on its blunt nose, floor and ceiling lined with multi-colored shag carpet and a glove box full of rolling papers, gum and incense.

I wandered the mind's backlot, finding myself lost in the late '60s and early '70s, the landscape of my formative years in the music biz. At age 16, I had made my first tour: a local music store sponsored my 6-piece, Tijuana-style horn band, The Solteros Brass, on a tour of the 1967 Montreal World's Fair. We floated around on an island in a lagoon in front of the Russian pavilion - two shows a day – before thousands of fair goers. I suppose this is when I caught the "tour bug" that continues to infect me to this day.

Fast-forwarding a few years, I am there at the 1971 birth of Max Creek and those halcyon days when all we wanted to do was stay buzzed and rock it loud 'n proud out in the country. John Rider and I met at music college in Hartford, CT in '68 as trumpet players in the college's wind ensemble. After school, we began working out our own folk-rock songs together. Bob Gosselin was my old high school bud who laid out a pretty solid drum groove so I asked him to make us a trio. We rehearsed in the basement of Rider's frat house and played all the hip watering holes Hartford had to offer. Both of them. We also played for frat parties, and even the regional strip-club circuit where we met some ladies who got paid to take their clothes off and baggy-pants comedians who introduced us to the glamorous world of professional show-biz. Oh, boy.

After graduation, we all moved into a country house together in Feeding Hills, Massachusetts (it really was out in the country in those days) and created our sound. When I contracted appendicitis, ending up hospitalized with peritonitis for a couple of weeks, the band had gigs booked and we wanted to honor that. This situation lead to Rider asking his frat-bro and keyboard genius, Mark Mercier to take my place. Mark added his perfect pitch, sparkle and color...and keyboards, too! It was decided he should stay. Now we were a quartet.

When I learned that my long-time music student, Scott Murawski, was

secretly a monster guitarist (all this time I only thought he played the trumpet!), I invited him up to the house to sit in with the band. He seemed to fit right in, making this Max Creek band sound freekin' awesome. It was lots of fun for a few years for me, until...

The band wanted to be more like the Grateful Dead. Nothing wrong with that, mind you, but the Dead were already the Dead! I was curious about different indigenous peoples, their musical cultures - their rhythms and instruments. I wanted us to be sonically and instrumentally "diverse". I mean, amongst us we had five songwriters, we had three trumpet players, everyone played at least one or two other instruments (including percussion). I was dabbling with drums, banjo and lap-steel guitar and I wanted to add these colors to the band. I was fascinated by thinking of the permutations and possibilities! Why did we have to do yet another version of Playin' In the Band, Casey Jones or Franklin Tower?

I was outnumbered and it was then decided that I should fade away. I did, but not before I'd contributed a few tunes and helped co-write others with the band.  The band went through its various phases and transmogrifications over the years, and my contributions were eventually forgotten.

But one tune, a countrified, bluegrass-style barn-burner instrumental called "Back Porch Boogie Blues" (not a particularly creative or inspirational title, I grant you!) seems to live on, even today, in the band's repertoire.

The band recorded it on it's first, eponymously titled recording and on the occasion that I sit-in with Creek for a reunion concert or festival show, we'll usually do this tune. Did I copyright the work? Nah. Didn't think of that kind of stuff in those days. Besides, who'd a-thunk the song would have had a shelf-life much longer than that of a box of pretzels?

Energized by all the reminiscing about my ancient music history, I polished off the popcorn, tossed off the dozing cat and roused myself from the recliner. I wandered into my office and fired up the computer, fine-tuned the "quantized unreality control" and dialed up the Max Creek website, just to see what the ol' crew had been up to.

It was kinda fun to learn that Scott now plays guitar in a trio with the Grateful Dead's drummer Bill Kreutzman and the Allman Bros.' bassist Otheil

Burbridge sometimes, and is working on a project with Phish's bassist, Mike Gordon! It was oddly flattering to see that the student had surpassed the teacher. I was proud of Scott. And seeing all their set lists, gig listings, etc. was a nice post-script to my earlier, private reverie.

I navigated towards some youTube sites that had concert footage of a couple of Max Creek anniversary reunion shows that I played, including the 30th at the Paramount Theatre in Springfield, MA in 2001, just a few months before the world would change on 9/11! Hot damn, we could still rock it - and rock it good! Despite more snow falling outside my window, I was enjoying myself immensely, warmed by these memories.

And then, I saw it: An amateur youTube concert footage of indeterminate origin titled "Phish Covers Creek" And there they were, those Burlington, VT jamboys blowing the lid off of a scorching instrumental tune. And what tune do you think the world-famous jam band was kickin' around? None other than my ol' "Back Porch Boogie Blues"!

At first I was profoundly alarmed, and even felt violated. “Who the hell authorized that?!? No one ever asked me about using my tune!”

Then I caught my breath and grinned. "How cool is that?!?"

Really, how many of us unsung songwriters get to have major acts cover our songs, even if they don't know they're doing it? Did I copyright the song? Of course not. As I said before, who'd a-thunk the ditties we were churning out would have had such long lives? We were shortsighted kids who lived only for the moment. So what. It's been so long since I'd penned it back in that house in Feeding Hills, Massachusetts. I don't know how I could prove it anyway. It's said that "possession is nine-tenths of the law" and Max Creek has now "possessed" that song far longer than me, I suppose.

I like the song alright, but they're welcome to it. So is Phish if they ever decide to swim up-creek again.  I guess it doesn't matter who wrote it...it belongs to everyone now. And I am glad. 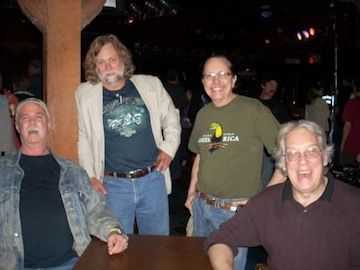