Last of the Caribbean Cowboys! 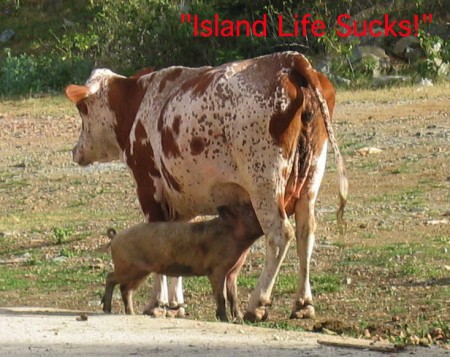 The late afternoon Caribbean sun hung warm and low in the azure sky as I was driving from sleepy Coral Bay over the Centerline Road. I was on my way down into town to pick up my sister at the passenger ferry dock in Cruz Bay. Across an unusually calm Pillsbury Sound, peek-a-boo glimpses of St. Thomas island in the distance could be seen as I was simultaneously lost in an island reverie while trying to pay attention to the steeply winding, narrow road.

I was nearly into Cruz Bay when, breaking through my peripheral vision, there appeared a spotted pig. Pigs, both domestic and feral, are not at all uncommon around the island and can often be seen walking slowly along the road, rooting on a forest trail or exploring a local dumpster. But this pig was sitting most comfortably on the ground, contentedly sucking on the tits of a rather placid red and white Guernsey cow who stood mindlessly gazing at the view while chewing her cud.

I’d not hit any rum, Red Stripe or herb, so what the hell was this? I turned my car around and drove back. Sure enough – not a hallucination. Pulling off the road, I dug into my pack and found my camera. The following vignette unfolded in the span of less than two minutes as I tried to capture my amazement on film .

Perhaps sensing my interest - or more likely having already drained that particular udder - the unsated pig, who had been partially hidden by Miss Bossy’s rump, stood up and moved around to the other side and reattached itself to the cow – in full profile. I was astounded because I was less than 100 feet away and both cow and sow remained nonplussed by my curiosity as I snapped away. These animals seemed to have more important matters on their minds. As if on cue, a second portly pig emerged from the brush and was approaching the “dairy bar” for its share.

However before this second porcine patron could place its order, across the clearing upon the horizon of the hill appeared . . . the Caribbean Cowboy! Exploding onto the scene, saddled up within his dusty, dented, black truck - a Bronco, perhaps? - complete with genuine Texas longhorns mounted on the hood, dual Peterbuilt horns blaring, headlights flashing and gravel flying, the Caribbean Cowboy was clearly intent upon turning off those bovine taps and shutting down this pop-up dairy bar operation PDQ. Or, maybe he simply intended to bring home the bacon?

Not seeming to notice, or care in the least, that the roaring, rampaging truck was bee-lining directly towards them, Miss Bossy continued to placidly chew, lost in her own bucolic bovine ruminations. All the while Porky continued to suckle greedily.

“Udderly delicious!” I imagined the slurping pig to be thinking. The second pig suddenly halted in its tracks, apparently reconsidering its dining options, and briefly stared at the approaching mechanized mayhem before galloping pell-mell into the shelter of the tangled bush.

The rattling black pick-up skidded to a stop in a cloud of red dust about 35 feet from the animals. The Caribbean Cowboy burst from the cab, dreadlocks flying as he hurled small rocks at the astonished animals - he must have had a ready supply of rocks on the seat - while racing barefoot towards the animals, roaring colorful West Indian epithets with each quickening step. There it all was, the archetypal Western epic, unfolding before my incredulous eyes, Caribbean-style: The Good, The Dread, The Porcine.

“Uh-oh! Fun’s over!”, I thought as I quickly put my camera down, hoping I wouldn’t be a target of one of those incoming stone projectiles. I imagined a cartoon Porky hastily beating a retreat in his blue sailor suit, stammering "Buh-duh-buh-duh-buh-duh-Tha-tha-tha-that's all, folks!" The Caribbean Cowboy sure had everyone's attention now!

Porky, joining the erstwhile Petunia, ran squealing off into the bush leaving his own personal “Dairy Queen” behind. Miss Bossy slowly turned her head, looked at the cowboy with mild annoyance for disturbing her daydreams and nonchalantly followed the pigs, ambled safely out of rock-range into the bush.

The Caribbean Cowboy, hands on hips and sucking his teeth, stared disgustedly at me as if to say, “Dis show be over, mon!” I smiled, waved and got back into my car. As I drove off, I could still see him in my mirror glaring at me. I hoped he was out of rocks.

I was glad I had the photos, because most folks just wouldn’t believe this one. Unless, of course, they've spent time in deh islands, meh-son!   Ah, well, so it goes. Just another day in the life of a Caribbean Island Cowboy. Or is that “Sowboy”?